Insects that sting belong to a large and varied order of insects known as Hymenoptera. Over 16,300 species are known in North America alone. The insects we will review here will be the ones you are most likely to encounter in your home or business.

Lets start with a little Biology

Insects in this order have a complete Metamorphosis, (egg, larval, pupal, and adult stages) in the development.

Some of these insects are solitary such as Cicada Killers, and Carpenter Bees. These insects live alone and are required to perform all the duties. They may only seek contact with like insects for mating.

Others are social, such as ants, yellow jackets, honeybees, bumblebees, and some wasp. Social insects live together in groups or colonies, and have a distinctive division of labor. This social behavior makes them very successful and the colonies populations can reach many thousands. The colonies are divided into castes, the queen or queens, the workers of which each group will have a specific duty, and the males.

The queen is the largest in the colony. She is the fertilized female and thus the egg producer. The main body of the colony is made up of workers. These workers are females but have not mated and do not produce fertilized eggs. They can however at the end of the season produce unfertilized eggs that will hatch into males. These males are needed for mating at seasons end and will appear August through October.

Many colonies produce new queens at this time for mating. These newly fertilized queens survive the winter and start new colonies in the spring.

The life cycle of a wasp colony in a temperate zone will only be one season. All the insects will perish in the winter, with the exception of the fertilized females. Ants, and honeybees however survive the winters and their queens can live for many years.

Reddish and dark brown, also golden, social wasp. These insects live under the eves, in attics, and many other warm areas. When the nest can be viewed, the insects are also visible.

Nest consists of a single comb (one layer) and is NOT covered by a protective envelope of nest materials.

Black bodies with white markings, Pinched waste (wasp like). Their nest are constructed aerially in trees and shrubs. They may also build directly on a solid surface such as a wall or even a window.

Nest can become quite large by the end of the summer. I have removed nests over 24 inches long and 3 feet in circumference. The nests have an elongated shape many times said to, “look like a big gray football”. Generally the color is gray, but can have other color tones dependent upon the material the paper nest material is derived from.

As the name implies, they are black and yellow striped. Several types

of this common insect are in many areas. The type determines the preference of location of the nest site which can be in trees, voids in wall, debris, and most of the time in the ground. This is the reason they are many times referred to as ground bees. The construct a multi-layered paper nest within a protective covering usually within a void or the ground.

Yellow Jackets are by far the most dangerous stinging insect in North America. Many times you when read about an individual attacked by “bees” and sometimes killed, the attackers are yellow jackets. When they build their nest in the ground many times this is in well travel space that we cut the grass, trim, and play. The insects usually will not attack until their numbers have reached the point they can afford losses and the colony “needs” protection. When they do attack they can attack by the hundreds. They “smell” the chemical pheromones from the stings of other attackers and you are “marked”. 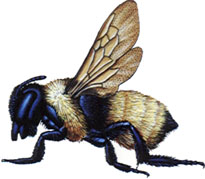 They build their nest in many different types of location, trees, wall, debris, and the ground. Most of the time I have found Bumblebees the nest were in some sort of soft loose material. Very common items are, insulation, grass trimming (mulch piles), leaves, rags, and rolled up paper/rugs. They construct a cone material for their young and feed then pollen and a kind of honey.

Bumblebees can be some of the most aggressive insects but fortunately they do not have huge numbers in the colonies; rarely have I seen numbers in excess of 100 adults. They are generally only very aggressive when they are protecting the nest site.

Honeybees (wild hives) will nest in most any cavity they find to their liking Including, Trees, and walls. They are very organized social insects and the colonies survive for many years. The numbers of insects in a single colony can be over 100,000. The wax combs are arranged vertically, and are two cells deep. The wax comb is made for multiple uses several of which are, raising their young (brood), and storing honey. Honey is made by the bees and is placed into the cells and “cured” to the perfect moisture content and sealed for future use in the winter when they will need these stores of food.

Fortunately Honeybees are not generally very aggressive unless their nest is disrupted. Honey bees can only sting once and then they die because when they sting they leave behind they stinger and the poison sac, and in the process pull out their insides. So when a Honeybee stings you it may be some comfort to know she is dead.

When the area the hive is occupying gets crowded the old Queen and a number of the workers will leave “swarm” to a new site. The remaining colony with produce a new queen for themselves.

In some areas of the country Africanized Honeybees known as killer bees have invaded. These honeybees can bee VERY aggressive and dangerous. If you live in an area with these bees avoid all honeybees and contact the authorities when you notice a hive. 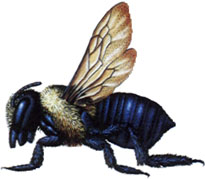 like very large Bumblebees, but differ as follows: They are solitary, the top of the abdomen is shiny and hairless, the hind legs lack the pollen basket, and they build their nest in wood. They can be quite destructive if left unchecked.

The females are capable of stinging but are reluctant to do so. The males do not have stingers but can still bite with strong wood chewing mandibles.

Adult bees mate, excavate tunnels, and lay eggs in the spring, and the new adults emerge in late summer. They may return to the same site to hibernate and begin again next year.

Carpenter bees are generally recognized by the large ½ inch holes they bore into the wood as their nest sites. Some times the holes are not visible but after a short while the mess made by the large bees fecal material notes an area near and below the nest site.

Very large brownish-black solitary wasp often near 2 inches long. The female cicada killer burrows into the soil, locates a cicada (often referred to as locust), paralyze it with a sting. It is then placed into the burrow where an egg is deposited on it. The burrow is sealed with soil or pebble.

The cicada is now food for the young Cicada Killers that hatch. This process is repeated until she exhausts her egg supply. They can be very bold, and scary when they dive at you, but rarely sting.

Generally found in fields, woodlands, and open areas, in dry to moist soils. They are mostly a dull yellow to red and or black color; having large heads in proportion to the body, curved jaws. They have a two-segmented waist between thorax and abdomen, and long legs.

Fire ants had a very limited area for many years. Today fire ants are not just limited to the tropical and very warm areas of North America. Fire ants have established themselves in North Carolina, Virginia, and other areas more north that thought possible just a short while ago. They are being transport into other areas by way of sod, nursery stock, etc.

Control has been difficult due to their high numbers and multiple Queens in the colonies. Many times when the colony is poisoned many die but the few survivors will scatter and produce many colonies rather than the one. Some of the modern baits do offer promise in the field.

Wasp and bees are of course very beneficial to man from pollination to the parasitic wasp that control many harmful insects. They also pose a serious threat to many people from their stings.

Venomous Arthropods attack over 500,000 people each year. Most people only have a mild reaction to the sting, however some people have severe to fatal reactions. Approximately 30 deaths each year are attributed to stings, however it is very likely the numbers are higher because many are attributed to heat stroke, heart attack, and others. Automobile crashes have occurred from bees getting into the vehicle and the driver panics.

Individuals that are very sensitive to insect strings may consider desensitization treatments and carrying a sting kit. Your doctor can give you more information.

Most of us fortunately can get relief from ice, a paste of water and sodium of bicarbonate (baking soda) to the wound. Watch out for any signs of anaphylactic shock (shortness of breath, sweating heavily, dizziness, throat swelling, bad swelling at the site, and others) and get help fast.